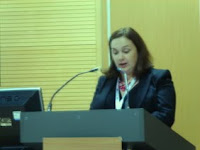 At the autumn conference of the Welsh Liberal Democrats held in Wrexham last weekend, a topical motion proposed by Eluned Parrott AM on behalf of the Vale of Glamorgan party called for a pause in preparations for shale gas exploitation in Wales. She pointed out that the technical briefing on mineral extraction made available to planning authorities was out-of-date, since it did not cover the technique of hydraulic fracturing. Speakers drew attention to the probable contamination of ground water and seismic events which have been attributed to hydraulic fracturing in parts of the United States. Cllr Frank Little stressed that action was overdue, since applications for exploratory drilling were pending, or had been granted, in many parts of South Wales.

The full text of the motion is as follows:

Conference notes that Hydraulic fracturing, also known as
‘fracking,’ is the process of drilling down and creating tiny
explosions to shatter and crack hard shale rocks to release the
gas inside. Water, sand and chemicals are injected into the rock
at high pressure which allows the gas to flow out to the head of
the well. The process is carried out vertically or, more commonly,
by drilling horizontally to the rock layer. The process can create
new pathways to release gas or can be used to extend existing
channels.
Conference further notes that:
1. There is an ongoing application to allow fracking at Llandow
in the Vale of Glamorgan, part of which was heard by the
Planning Committee of Vale of Glamorgan Council on 26th
September 2011
2. Fracking has been suspended in Blackpool pending further
investigation
3. France is maintaining a ban on fracking until there is proof
that shale gas exploration won’t harm the environment
4. The Welsh Government has failed to clearly outline a policy
on hydraulic fracturing.
Conference calls for a moratorium on hydraulic fracturing until
such time as it can be proven that it represents a low risk to the
environment and wider community.
Posted by Aberavon and Neath Liberal Democrats at 8:32 am