The Commons moves towards a People's Vote 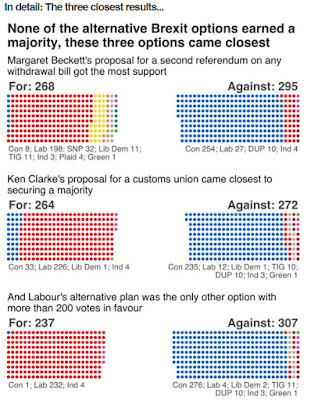 Yesterday evening's Indicative Votes in the House of Commons have showed that significant support has shifted towards giving the people the final say on Brexit. [Infogram courtesy of bbc.co.uk]

The confirmatory referendum received more support than Theresa May's deal and was the most popular option on the order paper.
Commenting, Leader of the Liberal Democrats Vince Cable said:
“As anticipated, the Commons has not produced an absolutely clear way forward, but it is clearer where the centre of gravity now is.

“What is essential is that whichever Brexit option the government pursues, it is put to the public in a confirmatory referendum. We have led calls for a People’s Vote for nearly three years, and we believe it remains as crucial this evening as at any time since 2016.

“The Leave campaign made promises which are simply undeliverable.  The public must be able to choose between the final Brexit offer – whatever that is – and keeping the deal we already have as full members of the European Union.”
Posted by Aberavon and Neath Liberal Democrats at 7:37 am