Education: a generation let down 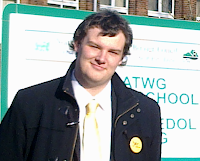 Reacting to Viv Thomas's scathing report issued earlier this week, Mathew McCarthy, prospective Assembly candidate for Neath, commented: "Under the Assembly Education minister, Leighton Andrews, the funding gap between England and Wales has grown to an unacceptable, and almost unbelievable, £604 per pupil. As we have seen, Mr. Andrews has no answers for any of the important issues, instead preferring to rant about Coco Pops and dodge questions. This time he is blaming anybody but himself for his failings. I feel it is important to bear in mind that during his term in office, basic literacy and numeracy levels among Welsh pupils have dropped significantly. Mr Andrews calls the Viv Thomas review a 'wake up call', but as with the countless other 'wake up calls' to the Labour/Plaid administration, it is one they would rather ignore until it is far too late. Welsh pupils deserve better, and with the Welsh Liberal Democrats and our pupil premium scheme, Welsh students can do better."
Posted by Aberavon and Neath Liberal Democrats at 12:29 pm

Best thing you can do as a politico is get away from schools and let the Headmaster and Governors run them. They are more qualified than you. They are professionals (in the true sense of the word)so free them up to the shop they are supposed to do. What is the worse that can happen? Can't be any worse than the current situation so let the teachers get on with the job.