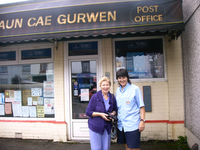 This is useful, so far as it goes, but it cannot make up for the loss of business relating to TV and vehicle licensing, and to the scheduled withdrawal of the Card Account in 2010.

Much more to the point would be reanimating the Post Office Development Fund set up by the LibDem/Labour partnership assembly government in 2002. This Labour has resolutely refused to do.

Let us be clear: we are not defending the Post Office Card Account (POCA) just for the sake of opposition, or just for the sake of keeping local post offices open. The POCA is the only kind of banking facility which is available to some people - and Gordon Brown's tax credit system insists on paying child & working tax credits into a bank account. There is no cash option.

POCA was also the sweetener offered to old age pensioners in return for giving up their pension books.

Posted by Aberavon and Neath Liberal Democrats at 6:55 pm 5 comments:

It has just been reported that the board of Corus has accepted a takeover bid from Tata of India.

Tata Industries is a long-established conglomerate, founded in 1868 by a member of a Parsee family. It became rich on the basis of textile manufacture, but has since branched out into many industrial areas, from steel to motors and IT.

Indians are the third largest external investors (after Japanese and Americans) in UK business, and have a rather better record of maintaining facilities - especially research - here than some other nationals. If control of Corus has to leave Europe, India is probably a safer destination from the point of view of Welsh job security than Russia or even the United States.
Posted by Aberavon and Neath Liberal Democrats at 6:23 pm 1 comment: 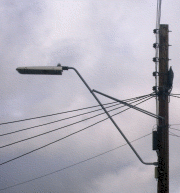 The wholesale renewal of Neath Port Talbot's old street lights gives opportunity not only to make sure that the most energy-efficient equipment is installed, but also that light pollution should be reduced.

As anyone who has spent a night in mid-Wales will attest, there is nothing so magnificent as the sight of a deep velvet sky studded all over with stars, undimmed by the glow from street lights.

We wouldn't go as far as Iceland did at the end of September. According to Reuter "Authorities in the capital Reykjavik will turn off street lights on Thursday evening and people are also being encouraged to sit in their houses in the dark", writer Andri Snaer Magnason said on Wednesday, "while the lights are out, an astronomer will describe the night sky over national radio."

Sadly, the Icelandic experiment failed because of cloud cover on the night.

- Frank Little
Posted by Aberavon and Neath Liberal Democrats at 9:48 am No comments: