This is probably the last time campaigners can sit back and pause for breath before the dash to the May 3rd poll and the Welsh general election finishing line.

The overwhelming impression has been of delivering leaflets in continuous sunshine. It makes up for all the campaigns in years gone by, foot-slogging through horizontal driving rain, trying to push soaking leaflets (with the ink running, of course) through doors in the hilly villages of the Neath and Aberavon constituencies. One has to add, what a transformation towns like Banwen and Cwmllynfell undergo when the sun is out.


The writers of this blog would like to take the opportunity to thank all the party members and others who have put themselves out for this campaign, and in campaigns past. We also send our good wishes to campaigners throughout Wales.
Posted by Aberavon and Neath Liberal Democrats at 11:14 am No comments:

It's about more than just management

It's things like Sajjad Karim's fight for human rights which remind me that party politics is about principle, and why I am in the right party.

Then news arrives from England of Sir Menzies Campbell's address to party workers in the build-up to the local elections there. He said:

"What we need is the dominance of principle over fashion.

(One might add: a similar belief that government was only about cost-effectiveness and centralisation in the name of efficiency.)

Sir Menzies said the environment was an example of an issue that had
become "fashionable" with other parties pushing it up the political
agenda, but the Lib Dems had been talking about it "for a long time".

Instead of photo opportunities, he said, "what we need is real, tough
decision-making about how we are going to deal with the problem of
climate change".

He also said the Lib Dems had once been "derided" for championing gay
rights, but had been shown to be right.

We are still derided for supporting victims of oppression abroad, because sometimes it means giving them a home here. Nevertheless, unpopular though it is for the Sun and the Mail, we will persist, because it is part of our philosophy. (Actually, their readers may be more liberal than the journalists give them credit for. There have been several occasions when communities have defended families from Africa or Asia, who have set down roots, against forced deportation by the Home Office.)

Commentators complain that "all parties are the same", because we appear to concentrate on which of us is better at managing the economy, the health service, civil order, education, the environment and the rest. I happen to think that we really would do better in England and Wales* than the other parties, because so many of our members are practical people - working professionals, small business people and middle managers - but that's not really the point.

Our approach stems from the party philosophy, expressed on page one of the constitution, and unchanged since the party was set up.

Our opposition to the invasion of Iraq stems from our belief in the rule of law, internationally as well as locally.

Our support for devolution is based not so much on assuaging pride in a native country or language, noble though these things are, but from the philosophy that government is best when it is closest to the governed.

(That is why I personally regretted siting the Senedd in Cardiff Bay. It does not bring government closer, in practical terms. to north and mid Wales than leaving decision-making in Westminster. Lest people should accuse me of hypocrisy, I should add that I voiced these opinions when I contested the Vale of Glamorgan in the first Assembly elections. They cannot have helped my chances!)

Our support for keeping open and, indeed, enhancing, local post offices stems from a belief in local communities, not just courting local opinion for electoral reasons, then ignoring it when in power.

We believe in open government, even if it means that pressure groups with which we do not totally sympathise may make use of the results.

One could go on. There are others. The point is that because vital promises are rooted in the philosophy of the party, they will be kept if we get into a position of power.

*We have already shown what we can do in Scotland.
Posted by Aberavon and Neath Liberal Democrats at 3:19 pm No comments: 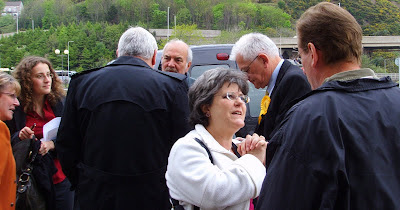 There is a growing need for a dental surgery in Resolven. The Liberal Democrats have been campaigning hard for local access to free NHS dental care throughout the United Kingdom. Peter Black AM, Liberal Democrat Regional Welsh Assembly Member for South Wales West, who has recently been campaigning for a Dental Practice in Pontardawe has now lent his support to the Resolven cause:

"Under this Labour Assembly Government more and more dentists have left the NHS with the result that communities like Resolven are left without a proper service. It is not reasonable to expect people to have to travel such distances to see a dentist. There is a need for Resolven to have a dental surgery of its own."Welsh Liberal Democrats are also campaigning for Salaried Dentists to visit Primary Schools to provide free check-ups.
Posted by Aberavon and Neath Liberal Democrats at 6:25 pm No comments:

How green are political parties?

While we were delivering our tabloid in Gwaun-cae-Gurwen today, a citizen accused us political parties of hypocrisy. "You all say you're green," he said, "but all four of you are sending out bits of paper to everyone which aren't read."

Since, at the time, he was using a pressure-washer to clean a piece of garden statuary, I don't think he was arguing from a green point of view. However, he did have a point.

The trouble is, I explained to him, that all the other parties do it, so we have to. Political parties are in the position of Leslie Lever, one of the founding fathers of Unilever, who reckoned that only half of his advertising was effective. The trouble was, he didn't know which half. The effectiveness of our advertising is somewhat less, but if we stopped it, the voting figures would show it.

PS It seems from a letter to Peter Black that the Green Party in Swansea is the worst offender of the lot!
Posted by Aberavon and Neath Liberal Democrats at 6:29 pm No comments:

Following Tony Blair's praise for LibDem-run Cardiff's renaissance, Welsh Labour's recent election broadcast highlighted the dramatic reconstruction of Swansea (run by a coalition in which Liberal Democrats are in the majority).

The Labour leaders of Neath Port Talbot council must be quite put out. There is large-scale building going on - the southern distributor road, the refurbishment of the Gwyn Hall, Llandarcy village, the gas pipeline (well, perhaps that last is a bit sensitive), yet Neath and Aberavon receive not even a name-check.

The uncharitable may think that the Labour parliamentary party does not like Dr Gibbons, Gwenda Thomas or Cllr Derek Vaughan. Coalition conspiracy-theorists could believe that Labour is deliberately boosting the Liberal Democrat vote.

The truth is more likely to be that the New Labour machine, run from London, has lost touch with the party's roots. It probably turned over the production of its election media to bright political graduates with presentation skills, but no knowledge of local government.
Posted by Aberavon and Neath Liberal Democrats at 9:55 am No comments:

If Scotland, why not Wales?