What did Nick Clegg refuse to do? 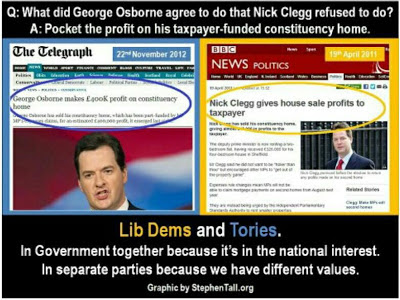 Posted by Aberavon and Neath Liberal Democrats at 9:22 pm No comments:

The Welsh Liberal Democrat Assembly Member for South Wales West, Peter Black, has welcomed the decision by the Care and Social Services Inspectorate for Wales to invoke the use of the Serious Concern Protocol for Children's Social Services in Neath Port Talbot.

Peter Black was reacting to an inspection report that was published today by CSSIW that concluded that "the service lacks direction and staff need clear guidance and support to promote consistent levels of good practice." The Inspectorate states that the "high turnover of staff has continued to have an adverse impact on the performance and continuity of service delivery to children and their families. [An improvement plan] has not resulted in clear direction for staff nor the improvements in practice which were identified in the last inspection as being necessary."

"Overall caseloads are too high, a significant number of new social workers have little experience of practice, there is a continuing dependence on agency workers, there is a high turnover of staff and stress related sickness absence. This is the third report of its type in two years," said Mr. Black, "And yet Inspectors still have serious concerns about the operation of this department and its effectiveness in protecting children

" I share those concerns, having had a number of issues brought to me by concerned parents and teachers over the same period.  What is clear is that committed and hard-working front line staff are being swamped with unmanageable caseloads, and are not receiving the support and guidance that they need. In these circumstances there is a real danger that a child could slip though the safety net. That is an unacceptable risk, so it is absolutely right that the level of intervention by CSSIW is stepped up to try and turn the service around."


Posted by Aberavon and Neath Liberal Democrats at 3:07 pm No comments:

Welsh Liberal Democrat leader Kirsty Williams said: "We have been arguing for greater devolution for over a century. This is the latest step in our long campaign for a federal UK. It will strengthen Wales and help make a real difference to the lives of people across the country."


Posted by Aberavon and Neath Liberal Democrats at 2:59 pm No comments:

The Welsh Liberal Democrat Assembly Member for South Wales West, Peter Black, has given his backing to Independent candidate, Mike Baker in Thursday’s election for a Police and Crime Commissioner for the South Wales area. Mr. Black met Mr. Baker today at the remembrance march in Bridgend and was impressed with both his experience and commitment to the role.

“The Welsh Liberal Democrats are not contesting this election because we believe that the Police should be above party politics,” said Mr. Black. “My vote inevitably will therefore go to one of the independent candidates.

“Mike Baker is a retired Police Officer, having served across the South Wales Police area for 30 years. He is currently working as a civil and criminal solicitor within the South Wales area. As such he has experience on both sides of the fence, being familiar with the system as well as the demands put on a modern police force.

“It seems to me that the Police Commissioner role was designed with people like Mike Baker in mind, an independently minded individual, who knows what is needed to ensure that front line policing gets the resources and support it needs. I will be giving my vote to Mike Baker on Thursday and I urge others to do so as well.”


Posted by Aberavon and Neath Liberal Democrats at 6:38 pm No comments:

'I'm extremely pleased Charlotte is standing for the Liberal Democrats in Neath South. She is local, young, and determined to make a difference in her community. Charlotte finally offers a real alternative to Labour who for too long have taken the people of Neath South for granted'

Posted by Aberavon and Neath Liberal Democrats at 10:55 pm No comments:

Mobile Home Bill to be introduced in the Senedd

On Wednesday he will be introducing it into the Welsh Assembly.

The Bill is intended to modernise the licensing regime for park homes across Wales - giving local authorities the powers to award and monitor licenses and to ensure site owners pass a fit and proper persons test.

The Bill also offers protection to mobile home residents wishing to sell their homes without prior agreement with site owners. It can be viewed here.

Posted by Aberavon and Neath Liberal Democrats at 11:53 am No comments:

LibDems want to reform the EU

Because we believe in the EU, we want to tackle its inflated spending, its protectionist Common Agricultural Policy and unfair Common Fisheries Policy - among other things. As Stephen Tall writes:

the Lib Dems have always championed a reformed EU. An EU which is more responsive to democratic opinion. An EU which liberalises the free movement of people and trade while tackling the problems we share, such as environmental pollution and crime.


Posted by Aberavon and Neath Liberal Democrats at 12:20 pm 1 comment: