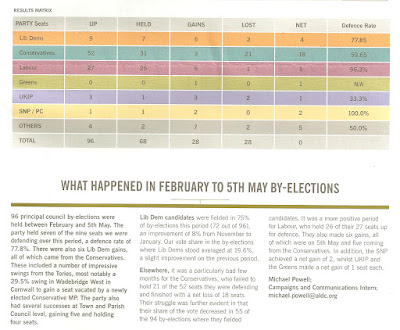 Liberal Democrats made net gains of four seats in principal council by-elections in the three-month period up to 5th May. The next quarter, which includes post-Brexit successes like these, is expected to show further improvement.


Posted by Aberavon and Neath Liberal Democrats at 9:22 am No comments:

Peter Black to be part of Mark Williams' team

Councillor Peter Black, former AM for South Wales West, has been named by Mark Williams, leader of the Welsh Liberal Democrats in his team of spokespeople. Peter will speak on Finance and Local Government, Heritage and Housing.

Aberavon and Neath Liberal Democrats congratulate Peter on his appointment.

Posted by Aberavon and Neath Liberal Democrats at 12:45 pm No comments:

Sir John Chilcot has published his report into the Iraq war. Responding, Liberal Democrat leader Tim Farron said:
“Blair was fixated in joining Bush in going to war in Iraq regardless of the evidence, the legality or the serious potential consequences.
“Daesh has arisen from the complete absence of any post conflict planning by the government.
“Charles Kennedy’s judgment has been vindicated in every respect. I hope those in the Labour and Conservative parties who were so forceful in their criticism of him and the Liberal Democrats at the time are equally forceful in their acknowledgements today that he was right. An absence of scrutiny by the Conservative party opened the door for Blair and the Labour Government to pursue a counter-strategic, ill-resourced campaign.
“I hope Sir John Chilcot’s findings can in some way provide comfort to the families of the British servicemen and servicewomen who lost their lives [including 14 from Wales], and to the people of Iraq. Hundreds of thousands of Iraqis have lost their lives and a generation has been shaped by this illegal war.
“Far from being Bush’s passenger, Blair was his co-pilot in taking this catastrophic decision which has destabilised Iraq, provided the hotbed for Daesh and tarnished Britain’s reputation around the world.“ More than 15,000 new members have joined the Liberal Democrats since the result of the EU Referendum was announced. With over 74,000 members, we now have more members than we’ve had in over a decade!
These new members have joined us because they share our values and principles. They know that we are the only party who can now speak for those who believe the UK is best when it’s tolerant, outward-looking and compassionate.
There are still many of you who are looking for someone to give them a voice in the wake of the referendum result. If you are not yet a member, you can join locally - see the sidebar on the right - or you can sign up via Twitter, Facebook or by clicking here.

Posted by Aberavon and Neath Liberal Democrats at 9:25 am No comments:

Help us fight for the EU

Posted by Aberavon and Neath Liberal Democrats at 10:54 am No comments: