We are still no wiser about Welsh Government performance, says LibDem AM

The 2011/12 National Survey for Wales found strong satisfaction levels with health and education in Wales, according to Wales Online.

Welsh Liberal Democrat Assembly Member Eluned Parrott said it would be a “justifiable aim” for the Welsh Government to learn about the success of policies. But she added: “However, I am deeply suspicious that this survey is too vague and unfocused to give any indication that could help steer the Welsh Government in any meaningful way. “When using a ‘1 to 10 scale’ on questionnaires, most organisations will expect to hit at least a 7 out of 10 for quality of service – unless they have significant problems.”
Posted by Aberavon and Neath Liberal Democrats at 1:24 pm 1 comment:


While Labour and the Tories debate how to reinvigorate their annual party conference programme, the Liberal Democrats democratic policymaking structure means that debates at their conference remain engaging and relevant. And with the party now in Government, the journey from the Conference floor to the statute book is rather more direct than has previously been the case. This means that over the next few weeks, the Lib Dem gathering in Brighton is the most likely place for progressive yet plausible policy ideas to get a hearing.

The Social Liberal Forum’s motion 106 on employee ownership, to be debated on Monday 24th September from 09:05-11:05, is a particularly good example. The motion calls for a number of radical measures relating to the stewardship of large companies (greater than 250 employees) including:
• The right for employees of listed companies to request 5% of company shares
• A role for employee representatives in major corporate decisions, including conditions of employment; Director’s pay; and the strategic direction of the company
• The right for companies to implement German-style two-tier board structures, with a supervisory board (including a shareholder’s representative) and a management board (including a worker’s representative).

It is exciting to think that these kind of policies could shortly be adopted by a governing party. They would go some way to ensuring that more of the profits from businesses go back to the people who generated them, in the communities they were generated. They would also help to combat inequality and out-of-control executive pay by empowering and incentivising ordinary workers, rather than resorting to punitive taxation.

Furthermore, employee ownership makes economic sense. Research from Centre Forum found that businesses with some degree of employee ownership were more productive and more resilient than their competitors. The Employee Ownership Index of companies with more than 10% employee share ownership has outperformed the FTSE All Shares Index by an average of 11% pa since 1992.

Intuitively, it makes sense that businesses that involve their workforce in decision-making processes will also take greater responsibility for their social and environmental impact. Current business models are entrenching inequality and failing to create jobs. With an annual income of £4.86 million, the average FTSE 100 CEO currently earns 185 times the national average We have recently witnessed major scandals in the banking, media and pharmaceuticals industries. So there is an urgent need for a new way of doing business with the needs of the community at its heart. Employee ownership might go some way towards this – workers representatives on boards would bring a different perspective to strategic decisions on areas like executive pay packages, for example, or environmental pollution affecting the community in which they live.

‘Business ethics’ is the theme of the High Pay Centre’s party conference programme this year, and we are hosting an event in Brighton in conjunction with the SLF on Monday 24th September at 8pm, with speakers including Lord Oakeshott and former Gregg’s CEO Sir Mike Darrington, on the evening after the debate on motion 106. Hopefully our discussion will encompass a set of radical new Liberal Democrat policies on employee engagement.

‘The Independent View‘ is a slot on Lib Dem Voice which allows those from beyond the party to contribute to debates we believe are of interest to LDV’s readers. Luke Hildyard is the Head of Research at the High Pay Centre.
Posted by Aberavon and Neath Liberal Democrats at 12:30 am No comments: 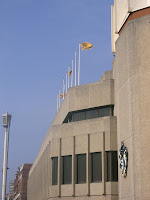 There is a live relay by BBC-Parliament. Huffington Post, Liberal Democrat Voice, Mark Pack and various other outlets will provide video clips and/or commentary
Posted by Aberavon and Neath Liberal Democrats at 1:00 pm No comments:

The elections in The Netherlands have been marked by a victory for the liberals of VVD and of D66. In his victory speech to an ecstatic audience VVD leader Prime Minister Mark Rutte triumphantly said that “[we] obtained the best result in history, and again have become the largest party in The Netherlands.” D66 leader Alexander Pechtold MP claimed “the fifth victory in a row”, saying that “in the bizarre duel between left and right, D66 managed to grow nonetheless”. Together the liberal forces now hold more than one third of the entire political spectrum. LI President Hans van Baalen MEP has called the election result a “great achievement for the Dutch liberals”. He said: “The populists of Geert Wilders had to accept a heavy defeat. Its anti-international and anti-European campaign did not appeal to the electorate. Wilders and his party are sidelined”. LI President expressed confidence that “PM Mark Rutte will be able to build a strong centre coalition, in which both liberal parties take part.”

[Thanks to Liberal International newsletter for this]

Posted by Aberavon and Neath Liberal Democrats at 10:12 am No comments: