A computer memory device containing confidential information about vulnerable children has been lost by a Neath Port Talbot council officer, according to a foster carer. The informant has voiced concerns that the youngsters whose details are on the memory stick could be put at risk.

This site, and that of Cllr Frank Little, have consistently warned of the dangers of lax computer security. It seems that there has been no borough-wide policy on data security, with the result that we see today. It is unclear whether the stick was lost within the education or social care departments, though the impression gained of a "hands-off" management style by the outgoing director of social services suggests the latter.

Enquiries have revealed that councillors were not informed of the loss, even though the Evening Post report suggests that the stick may have been missing for over a month. The news broke in the media on the day the council had its last committee meetings before the Christmas break. It will not meet again until the second week in January. We hope that our councillors will raise this as a matter of urgency then.
Posted by Aberavon and Neath Liberal Democrats at 9:46 pm 3 comments:

Nick Clegg launches the Green Road out of the Recession 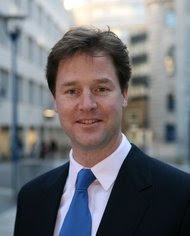 On his first anniversary as leader, Liberal Democrat Leader Nick Clegg, yesterday, set out plans to put Britain on a Green Road out of the Recession, creating jobs and leaving a legacy that will save energy, put money back into people’s pockets and fight climate change.

The plans will cost £12.5bn, which would be paid for by scrapping the proposed VAT cut. The vast majority of that money will be spent immediately, making a real impact on the economy and people’s lives right away.Green Road out of the Recession proposals include:

“As the recession deepens, every day we hear news of more workers being laid off, more families struggling with bills and more elderly and vulnerable people plunged into fuel poverty."

“The Government’s answer is to borrow £12.5bn to tinker with VAT when what is really needed is fresh, bold thinking."

“For the same money that it costs to make that tiny VAT cut, the Liberal Democrats propose a huge economic programme that will put the unemployed back into work and leave a lasting legacy that will save energy, reduce bills and fight climate change."

“Instead of a meaningless VAT cut that people won’t notice, we will insulate every school and hospital in the country and the homes of a million people languishing in fuel poverty."

“Gordon Brown and David Cameron argue about whether we should borrow money or not. They are two dogs fighting over the wrong bone. The real question is what we borrow for and how we invest it so that we all benefit in the end."

“These are real, achievable goals that would make a real difference to people’s lives now, create new jobs today, and leave us with the infrastructure for a long-term, green economic recovery.”

Posted by Aberavon and Neath Liberal Democrats at 8:49 pm 2 comments:

Your Local Council needs you!

We are looking for black and ethnic minority women who may be interested in standing for their local council to attend this event in Swansea. A flyer can be found at by clicking here.

This is an exciting opportunity to hear from Baroness Gale, the Wales Commissioner for the Women’s National Commission and Yvonne Jardine, Government Taskforce member, about how they got involved in public life and what it means to them. Participants will be given the opportunity to participate in two interactive workshops with experienced facilitators who will share their experiences; skills needed to not only become a Councillor but how to be an effective champion in your community.

The organisation is able to assist participants with travel arrangements to and from this event and have arranged free coach travel from Cardiff train station to the Guildhall in Swansea. The coach will be leaving Cardiff Train station at 8.00 and returning from the Guildhall at 14:00. If you wish to make use of this free travel service you will need to reserve a place on the coach. Please ensure you do this when registering online for the event as allocations will be on a first come first served basis.

Registration will commence at 09.30 with the event starting at 10.00 and is scheduled to end with a networking lunch at 13.00.

Posted by Aberavon and Neath Liberal Democrats at 11:20 pm 1 comment:

Beveridge was not soft on work-dodgers, but he would not have approved of the government's scheme, as this article by Anne Johnstone in the Glasgow "Herald" newspaper shows.
Posted by Aberavon and Neath Liberal Democrats at 7:51 pm No comments:

Today marks the 90th anniversary of the first British general election in which women were able to vote and stand as candidates.
Posted by Aberavon and Neath Liberal Democrats at 7:28 pm No comments:

LibDems Peter Black AM and Jenny Willott MP have warned that JobCentres are buckling under the weight of increasing unemployment. Peter said that "the government is relying too much on hard-pressed staff to clear up some of the mess their economic policies have helped create."

While the government closed traditional employment offices (Cymmer, Glynneath, Pontardawe and Ystradgynlais in Neath Port Talbot alone), the much-vaunted New Deal continues to make a net loss to the taxpayer of between £40 and £1100, even after the gain in tax and benefits is taken account of.

It should be remembered that these schemes were launched in the early days of this Labour government. Producing job creation schemes at a time of virtually full employment and then cutting DWP staff when mass unemployment threatens is of a piece with selling gold reserves when the pound is at its highest and trying to borrow ones way out of economic difficulties which were created by excessive borrowing.
Posted by Aberavon and Neath Liberal Democrats at 1:05 pm 3 comments:

Kirsty Williams has been true to her word in her successful leadership campaign. She is already making changes to the way Welsh Liberal Democrats are reaching out.

An early step is the launch of a new blog aggregator, which brings all the party's bloggers under a single banner. We are happy to note that we are included, along with the blog of our chairman, Cllr Frank Little.
Posted by Aberavon and Neath Liberal Democrats at 12:52 pm No comments:

Read about how you can help here.
Posted by Aberavon and Neath Liberal Democrats at 11:41 pm No comments:

The most embarrassing Whitehall leak yet

Home Office Watch is highlighting an embarrassing Whitehall leak: the Home Office's anti-leak guidelines for workers on the National ID Register have themselves been leaked!

If you are as concerned as we are, please sign our petition.
Posted by Aberavon and Neath Liberal Democrats at 11:37 pm No comments:

He may have served for only a few years, but Sir Henry Campbell-Bannerman set off a liberal and democratic revolution which lasted for over a decade. He brought to prominence those "Welsh pests" David Lloyd George and Samuel Evans, too.

David Steel and Charles Kennedy last Friday unveiled a commemorative plaque in Glasgow, his birthplace.
Posted by Aberavon and Neath Liberal Democrats at 12:30 am No comments:

With the pomp and ceremony of the Queen’s Speech in the House of Lords, and the State Opening of Parliament, the Welsh Electorate would be forgiven for missing the events that were going on in The Sennedd on the same day.

Opposition AM David Melding tried to introduce a Legislative Competence Order (LCO) to give the Welsh Assembly the power to appoint a Welsh Language Commissioner. Many supporters of the Welsh Language would see this as a good thing, unfortunately, the motion was defeated.

The record of the voting shows Labour either voted against this motion or abstained.

The record of voting also shows that eight of the 11 Plaid Cymru Assembly Members voted against this motion to introduce a Welsh Language Commissioner, those voting against the motion included Bethan Jenkins & Dr Dai Lloyd. What does this say about Plaid’s commitment to the Welsh Language?

It seems that there will be no chance for a jury to pass a verdict, it will be left to the voters of Neath whenever Gordon Brown dares to have a general election.
Posted by Aberavon and Neath Liberal Democrats at 12:36 pm 4 comments: