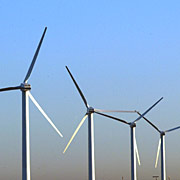 The arguments against the use of wind power to generate electricity are many and varied. However, it is essential in this modern day and age that we look for new energy forms that are both environmentally and economically friendly. It is even more essential that a sensitive development such as Fynnon Oer, is given the utmost consideration during the planning stage with significant input from the villagers who live nearby.

The continued use of gas, coal and oil by energy companies is becoming increasingly unacceptable in many peoples minds. This does not, however, mean that the answer lies with a new age of nuclear power stations as proposed by the Prime Minister in recent weeks.

Npower who are responsible for the implementation and running of the site have recently announced that they are putting aside £21,000 per annum for the life of the project (10 Years). Interestingly, sources at Entec have stated that this figure has now increased to £32,000 per annum since the project has moved from being a 21Mw site to a 32 Mw site. The fund is calculated on a £1,000 per Mw per year. This fund is to be set up to assist in community projects in the villages surrounding the development.

As a resident of Resolven, I urge Neath Port Talbot Council firstly to ensure that this money is indeed granted to local community projects and, secondly, that the decision making process of where to spend this money is devolved to the local communities themselves.