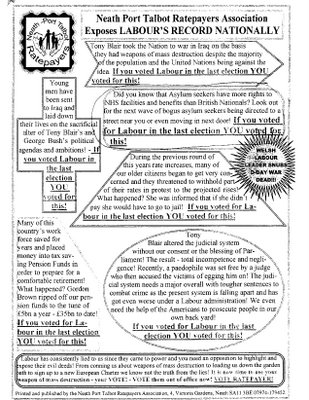 While the events of the 2004 Local Authority Election’s are something of a dim and distant memory, one of the less savoury events of that election, I feel, should be brought into the public domain.

In the Council Ward of Neath North, a leaflet was produced by the Neath Port Talbot Ratepayers Association, of which few people outside that particular ward have seen.

Within this leaflet, it clearly states that:

Did you know that Asylum seekers have more rights to NHS facilities and benefits than British Nationals? Look out for the next wave of bogus Asylum seekers being directed to a street near you, or even moving next door!

…..This particular leaflet sets out to highlight the many faults with the labour party nationally, one of which is the abysmal record of this government in controlling immigration, and in particular that of bogus asylum seekers, it has only tinkered around the edges of the problem without tackling it head on.

The word Bogus, if you look in the dictionary, is clearly defined as:- Sham, Spurious, False, Fake, or Phoney…….

…..No, this was not a racist leaflet. It is clearly an attempt by a wounded animal i.e. the local labour party to try and discredit the ratepayer association…..

Nowhere in this press release, does the author attempt to enlighten the electorate on why one of his candidates believes that Asylum Seekers have more rights to NHS Facilities or State Benefits than British Nationals.

Perhaps if the new leader of the Ratepayers, Cllr Tutton, has any observations on the above article, he would like to add his comments in the space provided?