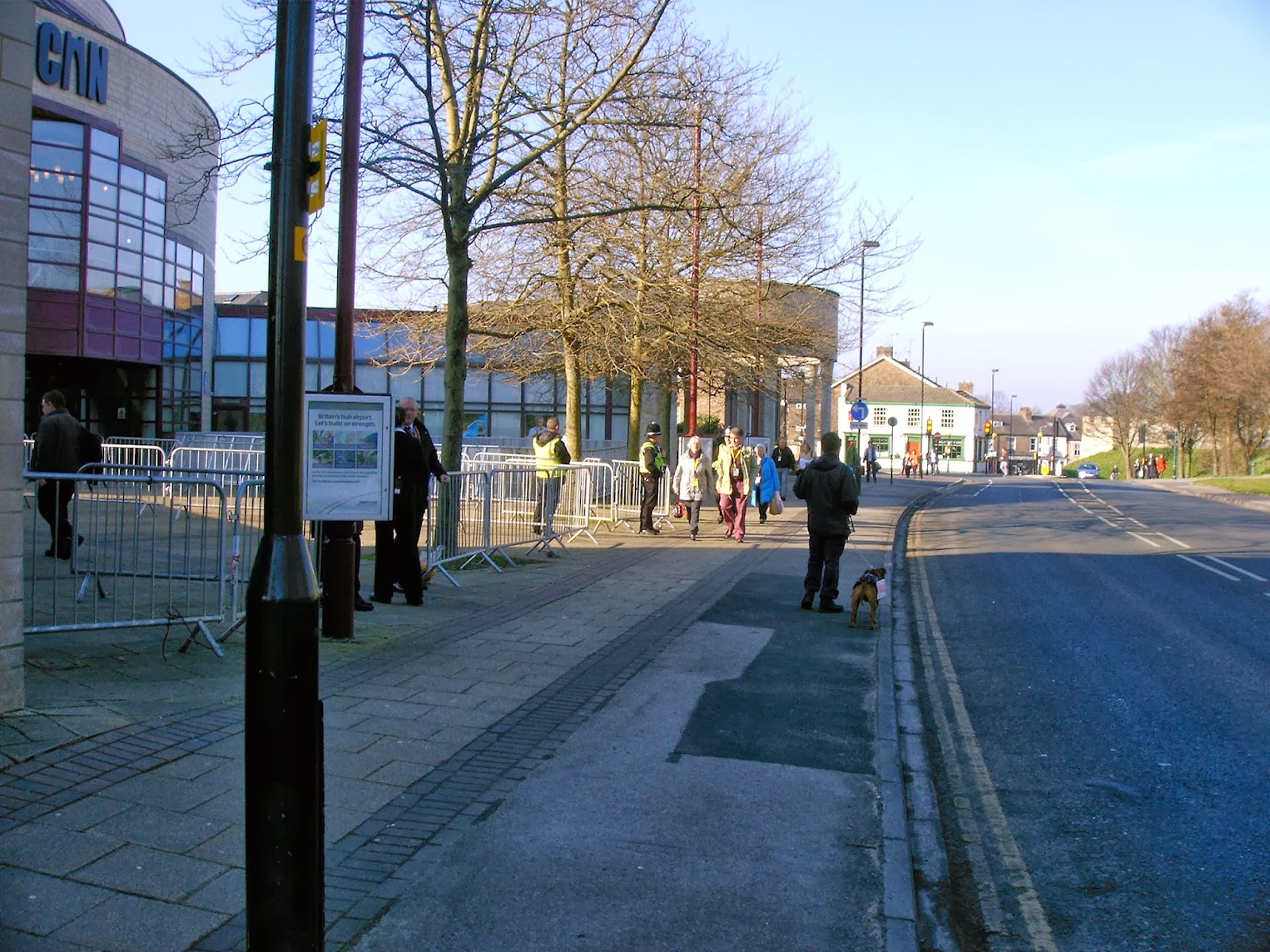 The day was dominated by Europe, both in debate and in the Leader's Speech. In between, the party expressed its concerns about the authorities' surveillance of electronic communications.

The day opened with a discussion without a vote on the topical issue of Ukraine. The debate was opened by Robert Woodthorpe Brown, chair of the party's international relations committee, with a response by Martin Horwood on behalf of the parliamentary party and with a summation from Dr Julie Smith, vice-chair of the party's federal policy committee. In between there were passionate and informed contributions, some from members with first-hand or family connections with Ukraine or eastern Europe.

There followed F18, "In Europe, In Work", a motion highlighting key Liberal Democrat policies for the European election campaign, based on existing policy as set out in last year's policy paper, "Sustainable and Secure". (Text of resolution follows at end of posting.)

F19, a motion developing policy on legislation that would enshrine the digital rights of the citizen and make sure the intelligence and surveillance services are properly accountable to the people they serve. It builds on existing policy on privacy and surveillance set out in conference motion "Human Rights" of 2012. Apart from an expression of vested interest by Martin Horwood, MP for Cheltenham, the motion was enthusiastically received. At least one platform speaker regretted the opportunities passed over by the Westminster parliament to redress the balance in this area. (Full text of resolution is included here.)

The Leader's Speech is available at http://www.libdems.org.uk/watch_nick_clegg_s_speech_to_spring_conference_2014 (video and transcript).

Text of motion F18: In Europe, In Work

I. Liberal Democrats want Britain to stay in the EU because we are
fighting for a stronger economy - millions of British jobs are linked to
our trade with the EU, and being in Europe gives us more strength
when negotiating trade deals with global players like the US, China,
India and Brazil.

II. Liberal Democrats are working to defend millions of British jobs, create
millions more and put thousands of pounds back in people's pockets
by making it easier for British companies to export and slashing red
tape for small businesses.

III. Liberal Democrats are fighting for safer communities by ensuring our
police forces have access to key EU crime-fighting tools.

IV. Liberal Democrats are fighting for a greener future by working with other
EU countries to combat climate change, create green jobs and reduce
pollution.

V. The Tories and UKIP are putting millions of British jobs and billions of
pounds of investment at risk by undermining our membership of the EU
while Labour can't be trusted with the economy at home or abroad -
their reckless spending and failure to regulate the banks crippled
Britain's economy while their MEPs support measures that would
impose huge burdens on British businesses.

VI. Liberal Democrats are the party of 'in' - In Europe, In Work.

Conference welcomes the record of Liberal Democrats in the European
Parliament and Westminster in delivering:

A. Jobs - for example through the conclusion of successful trade deals,
EU funding that has created over 200,000 new jobs, securing €60
billion EU funding for research and technology over the next 7 years,
and the creation of a single EU Patent system.

B. Safer Communities - for example through fighting off Tory and UKIP
attempts to withdraw the UK from the EU Arrest warrant, new EU laws
to help British victims of crime in other EU Countries, and stronger EU
co-operation to fight human trafficking.

C. A Greener Future - for example through an agreement for the EU low
carbon roadmap that paves the way towards a low carbon economy, a
radical overhaul of the Common Fisheries Policy to ban most discards
(throwing dead fish back into the sea), EU energy efficiency laws that
will unlock investment in energy saving technologies, and major reforms
to the Common Agricultural Policy that will help cut emissions and
protect our countryside.

Conference resolves that the Liberal Democrat Manifesto for the 2014
European Elections should set out a strong future policy agenda based on
these priorities and the policies adopted in policy paper 113, Prosperous,
Sustianable and Secure (September 2013), including:

2. Fighting cross-border crime and defending rights by pressing for a
European Union missing child alert system to be implemented quickly,
setting up a European Union database of unidentified bodies help
families searching for missing loved ones, supporting the work of the
new European Cybercrime Centre (EC3), and working to secure speedy
implementation of the European Commission's new proposal on
fighting money laundering, pushing for a European Union-wide
proportionality test in the use of the European Arrest Warrant, and supporting
the full implementation of 'Eurobail' to allow British citizens to serve their
bail back in the UK.

3. Protecting the environment and creating green growth by committing to
reduce the EU's greenhouse gas emissions by at least 50% by 2030,
urgently strengthening the EU Emissions Trading System mechanism,
pushing for more international grid connections between European
countries to ensure we can meet our climate change goals faster and at
a lower cost, promoting better European energy labelling, and
encouraging sustainable consumption in European Union member
states, including by arguing for the European Union to support the
target of halting net deforestation worldwide by 2020.

4. Building a safer, stronger financial system by ensuring better quality of
regulation in order to protect the economy, businesses and jobs,
fighting for fairer rules that will clamp down on manipulation of energy
and financial markets as exposed by the LIBOR scandal and Brent Oil
fixing investigation, ensuring fairer mortgage repayments and fuel prices
for consumers, supporting alternatives to bank financing for small and
medium sized companies, and pressing for new rules that will force
large companies to disclose the countries where they pay their taxes,

5. Getting a better, fairer deal for consumers by campaigning to abolish
mobile phone roaming charges once and for all, supporting higher
standards of food inspections across the European Union with better
country of origin food labelling, supporting greater protection of
holidaymakers' rights to compensation if their holiday company goes
bust, and making it easier for consumers to gain adequate
compensation when people suffer losses due to malpractice, through
new rules that will make it easier for consumers to take cases together,
reduce the number of court cases and cut costs for the claimants.

6. Building a more sustainable future for rural communities and businesses
by supporting continued reform of the Common Agricultural Policy with
more devolution in agricultural policy, ensuring continued support for
rural communities, particularly upland and less favoured areas, and a
mid-term review in 2017, and promoting a more sustainable fishing
industry in the UK, with the expansion of European Marine Sites, a
100% ban on the discard of edible and other usable fish and want
tougher enforcement of European Union fishing rules by all member
states

7. Helping to build a safer and more democratic world through a more
effective European Union foreign policy, building more security and
democracy in the European neighbourhood, deeper defence co-
operation in Europe, with the European Defence Agency, in co-operation
with NATO, playing a central role in helping states to pool and share
military capabilities, and better co-ordination of development assistance
provided by European member states and by the European Union itself.

8. Promoting fairness and opportunity by encouraging government and
universities to fully publicise the opportunities available for young people
in the UK to take advantage of EU schemes for studying and working
abroad, and supporting fair rules to underpin free movement of workers,
such as the Coalition proposals to support an EU framework whereby
EU  migrants do not claim benefits before spending six months in the UK.

9. Reforming the European Union by campaigning to end the waste of
having two meeting places for the European Parliament, supporting an
audit of existing European Union agencies and institutions to find ways
to rationalise and find savings, and calling for a guarantee in the next
European Union treaty that both Euro area and non-Euro area member
states have a full voice in the regulation and application of the single
market.

Conference further resolves that Liberal Democrats are committed to giving
the British people their say in a full in/out referendum in the event of
proposals for any further significant transfer of powers from the UK to the
EU, and that Liberal Democrats will campaign for an 'in' vote because it is
overwhelmingly in Britain's national interest to stay in and pursue the
policies on jobs, crime and the environment outlined in this motion.

Posted by Aberavon and Neath Liberal Democrats at 8:01 pm