Aberavon and Neath Liberal Democrats are pleased to confirm that our candidate for the Neath constituency in the December general election is Adrian Kingston-Jones. 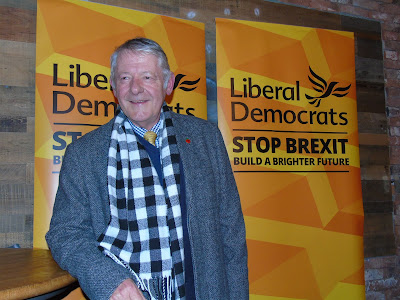 Ex-RAF technician and local Security Officer, Adrian is a member of the GMB Union and a reading member of the RUSI (Royal United Services Institute) and Gorwel (independent non-party Welsh) Think Tanks. Living in the constituency, he enjoys hill walking, reading, writing, listening to music and target rifle shooting.


Adrian moved into Neath in 2012 and is actively and passionately interested in Welsh affairs, multi-culturalism and reducing xenophobia, increasing fairness and equality and reducing social disenfranchisement, and matters relating to defence and preserving the Military Covenant. He is, of course, passionate too about remaining in the EU.

He said, “The EU has given us decades of peace, unusual in Europe, and places us in an economic block that counters the weight of Russia, China and the United States – all of whom would love us to become an easier to pick off island."

Posted by Aberavon and Neath Liberal Democrats at 10:47 am

Hello Adrian, we would be pleased to have a chat and find out more as it appears almost all the candidates for this election locally (Neath) have little or no information about themselves or their policies available. Some don’t propose to live in the area (Jonathan Burns - Conservative) and don’t appear in any Google search.
When will candidates be canvassing our area (Pontardawe)

David Evans: I did a double-take, too! "Reading" is correct.

It looks as if Jonathan Burns is the same Jonathan H Burns who was a Cardiff councillor and stood for Torfaen in 2010. He seems (as "Jon Burns") now to be an officer of the Gloucester Conservatives and is pictured in a group here: https://www.cliftonbrown.co.uk/content/weekly-update-31

As to Pontardawe, we are on a tight schedule, having had to select a candidate late, but I shall see what we can do. It would suit me, since Ponte was once my stamping-ground.